Skip to content
You are here
Home > Collectors > Sneakerhead in Focus: ryustyler

Sneakerhead in Focus series is all about stories and the individuals behind them. On this virtual tour of the world, we bring you ryustyler from Taiwan whose amazing kicks and unique clicks have added the much needed Asian flavor to our line-up. In this ninth episode, we find out the secret behind those delicious clicks, his perspective on the Asian scene and others’ perceptions about it, and get to dig into his top 5. 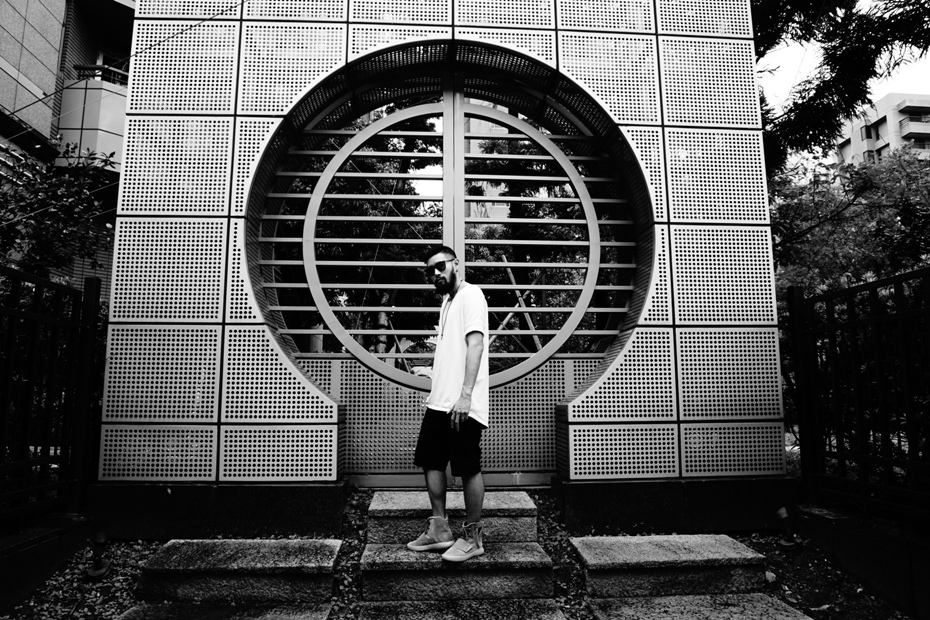 Hello sneakerheads, I’m Michael aka Cola. Taiwanese made and Aussie raised. I’m your typical “starving artist.” I create and sell contemporary art pieces at galleries in Taipei and Tokyo. I work primarily with oils and acrylics on canvas and I have also taken commissions to design record album covers and t-shirts.

I have a love/love relationship with sneakers – being a sneakerhead is an important part of who I am and the shoes I wear are a way for me to express my identity.

How did you get into sneakers? What turned you into a collector?

I was blessed to grow up with connections to the performance footwear industry. My grandfather, a former athlete, was a product designer and inventor in sports manufacturing so it was only natural that he always wanted us to use the latest technologies and best quality gear.

However, I took all that for granted as a kid and it wasn’t until 1997 that I started to be drawn to the aesthetics of shoes. I began to actively pursue and truly appreciate sneakers. The Nike AF-1 at the time wasn’t necessarily the most functional shoe around, but there was just something about the all crispy white on white and thick sole that did it for me, and my love for sneakers went into hyperdrive, escalating from 0-100.

You used to take on-feet pics but switched over to clicking pics of shoes with yummy desserts. How did the idea of #deliciouskicks originate?

Back then, I thought on-feet pics were a bit over-saturated, and that many of my peers were rocking it better with high-res photos and better execution. I saw and continue to see great on-feet photos all the time, but I didn’t want to do what other people were doing. At that time, I was feeling frustrated because a well-known artist in Taipei had copied from several of my paintings. So I was really motivated to do something new, something original and to take ownership of what I wanted to create.

The #deliciouskicks concept happened organically when I was in that mindset of trying to cook up something original. Aesthetically and emotionally, I appreciate the feel of a well-made shoe the same way I appreciate a well-cooked meal, so that sense of real satisfaction was part of what I was trying to communicate and the connection was born there.

Your earlier tastes predominantly included Nike. How did the transition to brands like NB, ASICS and Diadora happen?

During the several years that I was in Tokyo for work, I saw how seriously people there took their work. I admired the sense of professional pride they had to stand behind a product and say, “I was part of that.”  What I took away from my time there was no cutting corners and a commitment to quality, quality, and QUALITY. It’s important to me that when I buy a product, it’s made with care and attention to detail, and not made by a child in a sweatshop. 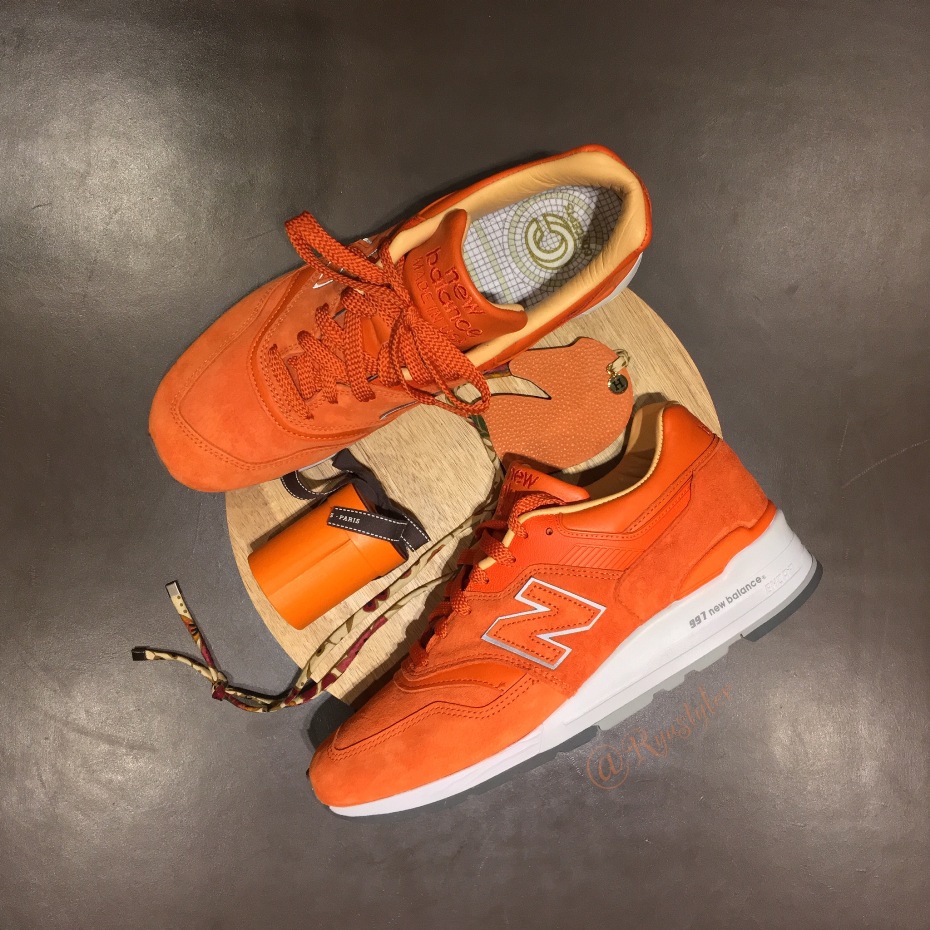 I still buy Nikes, especially the models that are meaningful or nostalgic to me. For certain releases, I just don’t think that the price point is justified by the materials, especially with consistent factory flaws like glue stains. Pound for pound, there is often just more bang for the buck elsewhere.

How’s the sneaker scene in your city? Are there any notable boutiques in Taiwan that people are unaware of?

The special thing about shopping in Taipei is that often, the same kinds of products are concentrated in one area. Dong Qu (東區 East District) has 3 tier zero accounts (Invincible, Phantaci, and Juice by CLOT) that are all just seconds away from each other.

The sneaker scene in the city is very alive and includes people of all ages, ranging from young teenagers to those who remember MJ taking off from the free throw line. Unfortunately, most people here are easily drawn into being told what to buy or wear so we have our fair share of poster hypebeasts. In fact, the Taiwanese have a phrase for that called 趨之若鶩, which translates to “a mob on a wild goose chase.”

What criteria does a shoe have to meet in order to make it to your collection?

I’d be lying if I told you I don’t feel “extra special” when I cop a more limited pair. At the end of the day though, it doesn’t matter if only 500 pairs dropped or 500,000 GR pairs came out. Butter and comfort are crucial, and how well I can pull it off with my wardrobe is always key. Just because it looked piping hot on somebody else in the promo pics doesn’t mean that the shoe and I are right for each other.

Can you shed some light on the duplicacy myth related to everything Chinese? What tips would you give to someone shopping online for kicks from a TW site? Do you think the perception is costing the region some serious revenue and exposure?

Yeah, there is a widespread belief that the Asian market is just a flood of low-quality knockoffs at cheap prices, and that definitely hurts manufacturers and consumers. Although it’s misleading to say that there aren’t genuine products or great products, it can be hard to navigate. For buyers, I would only buy at reputable boutiques and websites that take paypal. With anything, it definitely helps to be well informed about how the fakes are keeping up and how the original product should be.

Overall, I think what that reputation does is it harms the opportunities for great craftsmen and great products. For example, the really lux bespokes from NikeLab, which start at $800USD, are produced by Taiwanese factories, and they do an amazing job with construction and quality. Limited releases like the Mark Smith Laser series are also produced in Taiwan, so the capacity for really high-end, reliable, and meticulous manufacturing is completely present in Asia.

In my experience, the reason for low quality products is economic – you can make more money faster by selling a lot of something cheap. For example, I was in a meeting with the owner of a very reputable international manufacturer. When I asked if we could upgrade the materials of our product, I was told by the owner that it doesn’t pay to make anything too high in quality because if the product lasts too long, you won’t sell more. That fast-fashion mindset is behind a lot of the lower-end products in the Asian market.

Your Top 5 Sneakers from your collection

These may not necessarily hold  the most sentimental or monetary value in my collection, but these are currently strong in my “Starting Five” that I am rocking. 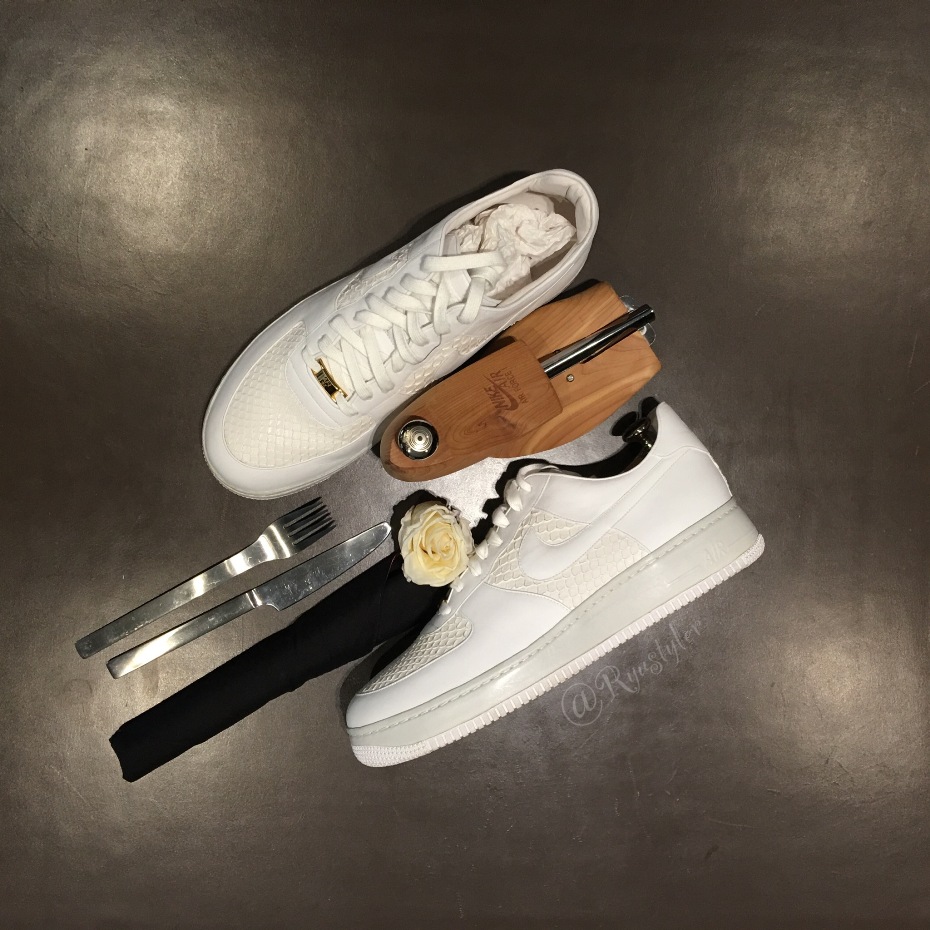 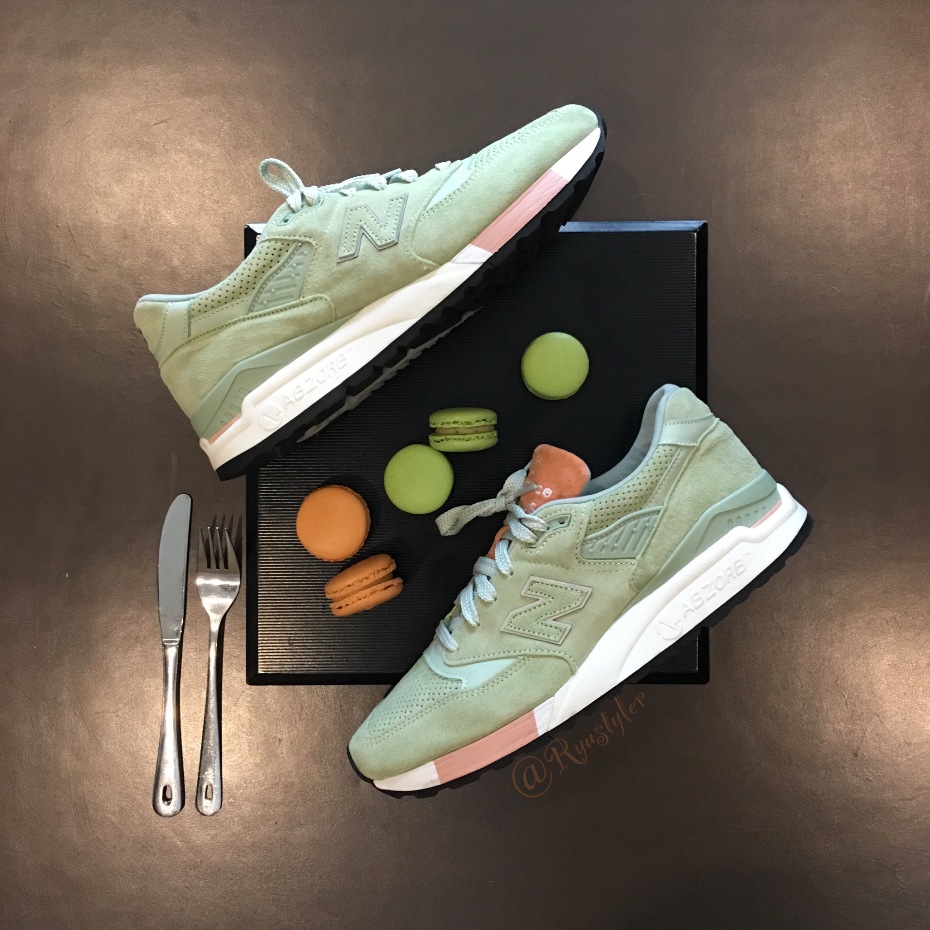 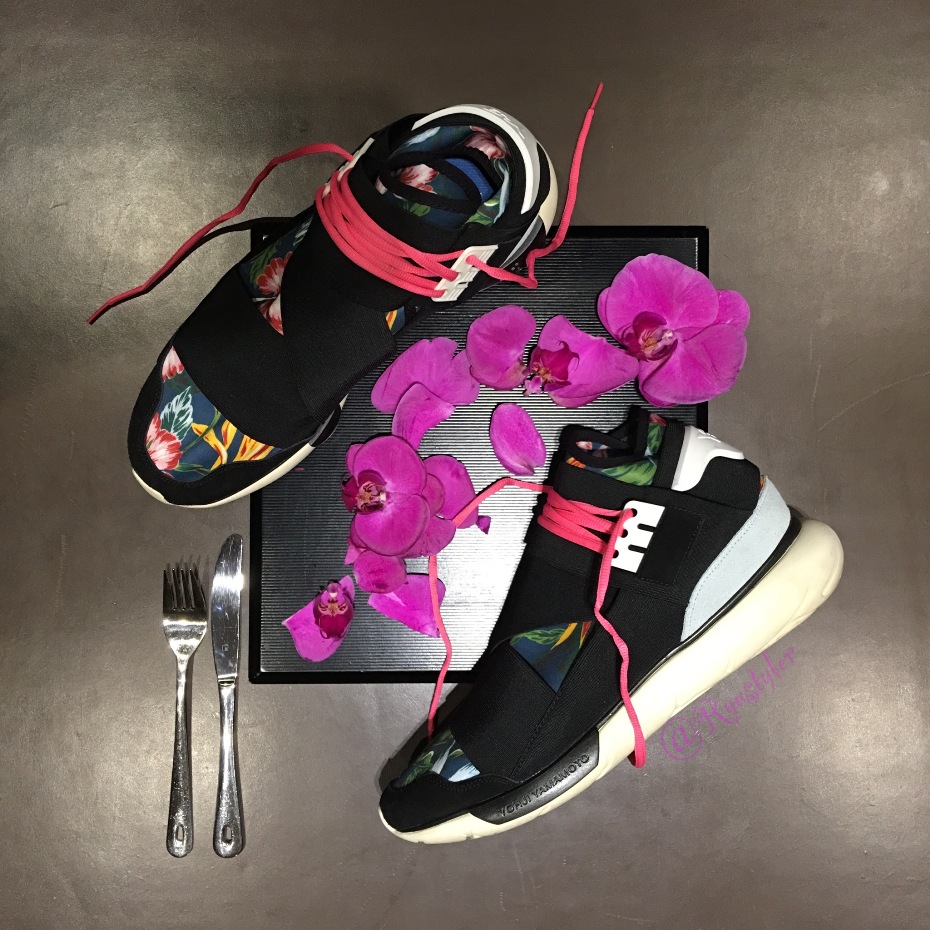 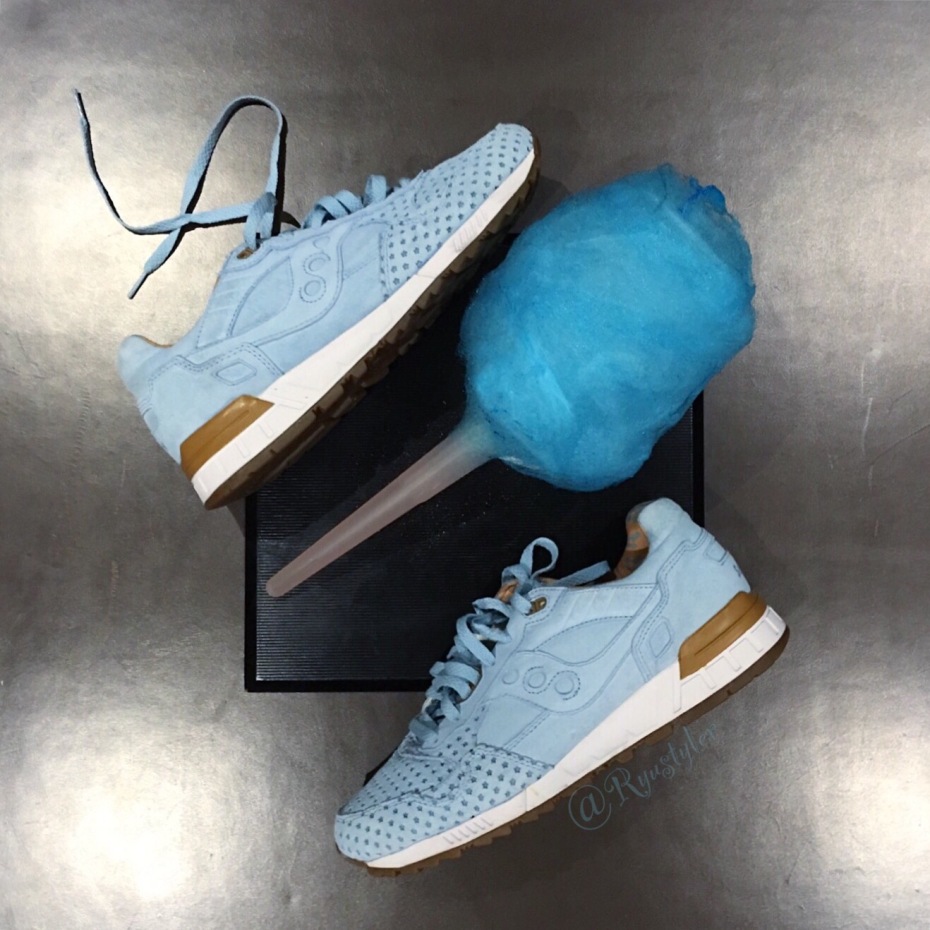 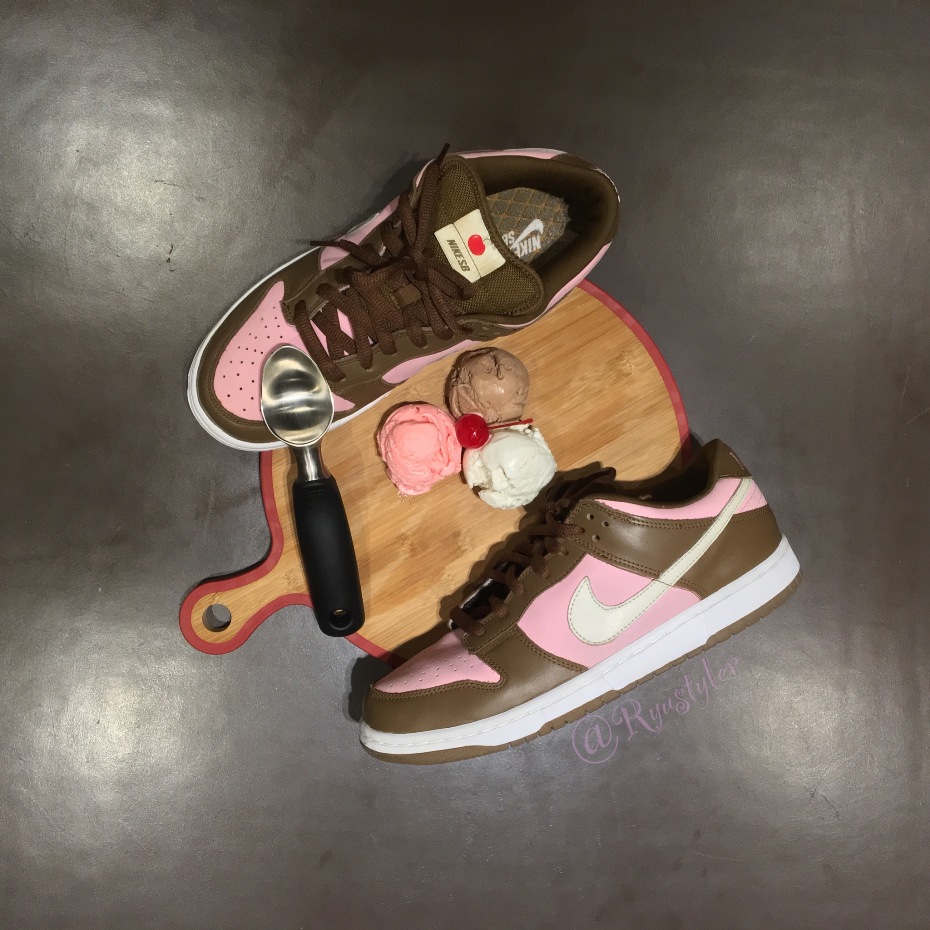 When I discovered this hobby as a chubby teenager, I never thought that 20 years later, my adoration for sneakers would still remain the same, nor that I would be blessed enough to be able to meet so many heads like myself. Shoutout to my sneaker solemate, @Chad_414, who drove 3 hours from NY to meet up during my recent trip to Boston. Also many thanks to “King of Munich”, @Benstah23, for kicking it with me with his Germany hospitality. Appreciate it, brother!

Last but not least, thanks to thatshoeguy for this feature and always bringing a positive impact for the sneaker community!

Michael’s collection is elevated to the next level by his eye for aesthetics and the execution behind each click. The whole idea of the taste palette combined with kicks and the matching color palette has a unique appeal to both a normal ogler as well as a discerning eye. This gets further accented by his choice in kicks that he has collected over the years. I was speechless the first time I stumbled upon his feed and saw the tasteful presentation which had my intrigue meter going crazy.  I owe a big shoutout and thanks to ryustyler for agreeing to do this feature and for taking the time to go the extra mile with so many dope shots of his kicks.