The next stop in the Sneakerhead in Focus series is Sweden and this time we have a collector with us whose love for film and shoes is deeply correlated. In this feature, he opens up about his major influences, how he got started, what turned him into a collector, what are the vibes in his city and shares his top 5 sneakers with us.

The man behind the IG account grumpy_g dedicated to the art of sneakers is Thomas Berg, a 38 year old projectionist living in southern part of Stockholm. Growing up in the suburbs, now residing in the southern part of Stockholm, Thomas spends most of this time with his family being the most awesome uncle to his nieces. Of course, providing them with the greatest kicks matching each individual’s personality – because that’s what he does.

As a projectionist, he is one of the chosen few in this world that still have the privilege of handling and screening real film. He takes care of all types of projectors and creates cinematic magic everyday at work at the Swedish Film Institute. After all, how many can say they have screened the original copy of Fear and loathing in Las Vegas? He loves both cats and dogs, apparently more than most humans! He fights all types of injustices while his Sneakers make the roads he walks on quite a treat. He is appalled by re-sellers that do not respect the art but rather think about the profit. 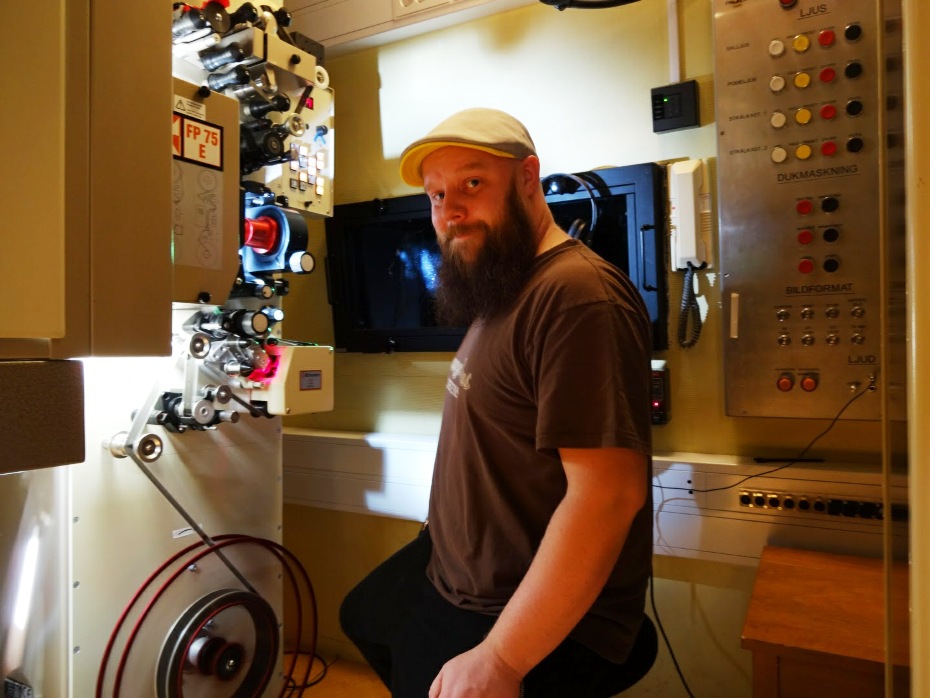 How did your love for sneakers begin?

It all began when I was around 12 or 13 years old. I played tennis and I found myself spending a lot of time in various sports stores looking at sneakers, but since my family wasn’t very wealthy I rarely bought any. Then around autumn 2009 I started working as a projectionist at a cinema called Rigoletto located in Stockholm City.

I met my friend Johan there, another sneaker-head. He introduced me to the 35th anniversary edition of the Adidas Superstar and I was hooked.

What turned you into a collector?

Working in Stockholm city gave me the opportunity to find those specialized sneaker stores and Johan sold me my first collector sneakers – The Hellboy II.

Something woke up in me, that little kid that couldn’t afford sneakers, suddenly had endless choices. I ended up buying most of Johan’s collection – about 20 pairs or so of Adidas Superstars.

How is the sneaker scene in your city?

The sneaker scene in Stockholm is mostly fueled by hype in my opinion; Yeezy’s, NMD’s and so forth. But you still find those old school sneaker heads around the country, usually a little bit older and searching for that lost treasure and aren’t tempted to get those new shiny kicks. I’m a member of a Facebook group called Runner Club Sweden consisting of exactly these types of sneaker heads. I love it. No drama, no hype – just kicks.

European consumers usually lean towards a lot more variety. What would you say have been your major influences?

I would say any sneakers with cinematic relations. Combining two of my passions in life; sneakers and 35 mm film has put me down a path of Star Wars, Hellboy and old school Swedish films such as Utvandrarna and Dunderklumpen. On the other hand my 120+ pairs of Superstars have mainly been inspired by friends and social media platforms. The way social media has taken over the world is great in the way that it opens up the sneaker world, whatever your current location may be. 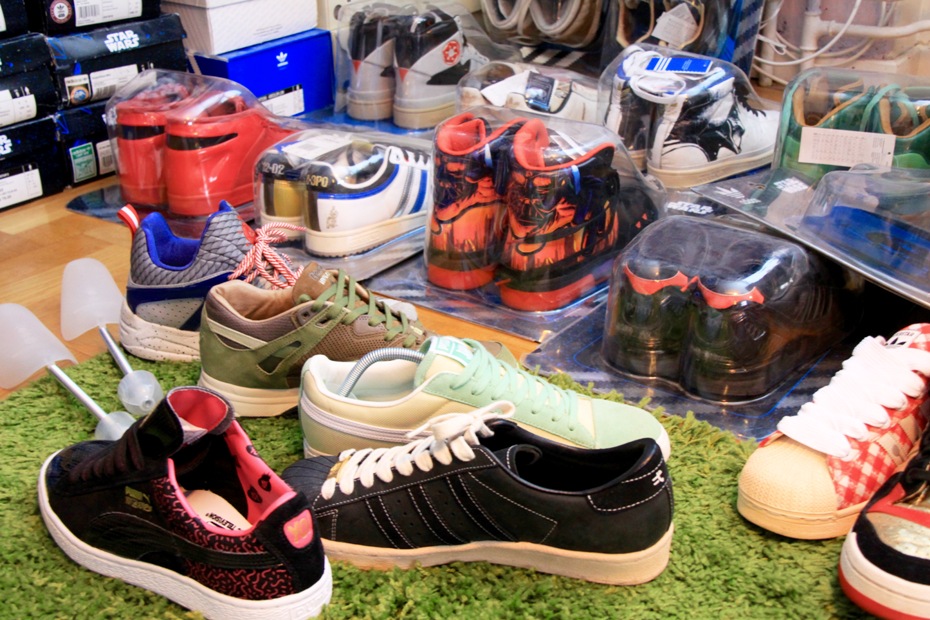 What made you fall in love with Adidas, Puma and Reebok?

Tough question! It’s all about the feeling, the shape, the structure and materials used in the quest of trying to create that perfect pair of sneakers. Each brand has its ups and downs. Sometimes the hype is bigger than the actual product. And I fear that it results in rushed productions and less quality control. But I love seeing the evolution of thought behind each brand – where are they headed? What do they want to succeed and communicate with their designs? It’s all very fascinating.

Do you experiment with brands like Karhu, Roos, etc.? Why/why not?

Of course! I don’t discriminate! I look for art – not brand in particular. I might prefer Adidas, Puma and Reebok but I choose not to close my opportunities to find something outside my shoebox. Just the other day I bought my very first pair of New Balance.

How important are collabs to you?

I would say rather important. I think it’s a gutsy way for established brands to open up their production to other creative people. And most of the times the results are impressive and a gust of fresh air.

What’s your favorite sneaker boutique and why?

Easy! Sneaker n’ Stuff Stockholm! Not only is the staff marvelous but they are well informed and professional. Also, they pretty much take part in every major release of new exclusive sneakers. 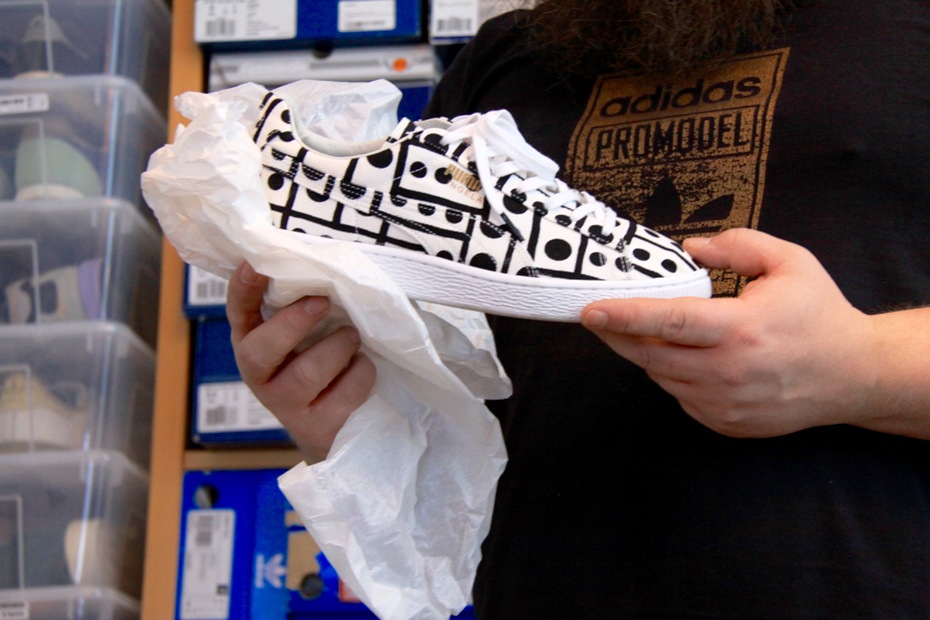 The prices of sneakers have taken a huge jump. Adidas coming out with its 3d sneaker has changed the game further. Do you think sneakers are becoming un-affordable these days or do people now have more disposable income?

Taken into consideration that I mainly focus on old collections, I don’t find myself affected by the increase in prices. I feel like it has gone from being a social statement to a fashion accessory. I truly don’t understand why a pair of sneakers would cost thousands of SEK (Swedish Krona) and I definitely will never understand why some pay over retail price for a pair of kicks.

Which sneaker stores do you recommend to fellow Swedes and people who are travelling to your city?

Your Top 5 Sneakers from your collection

Impossible to give you a top 5! But I’ll leave you with my 5 picks at the moment: 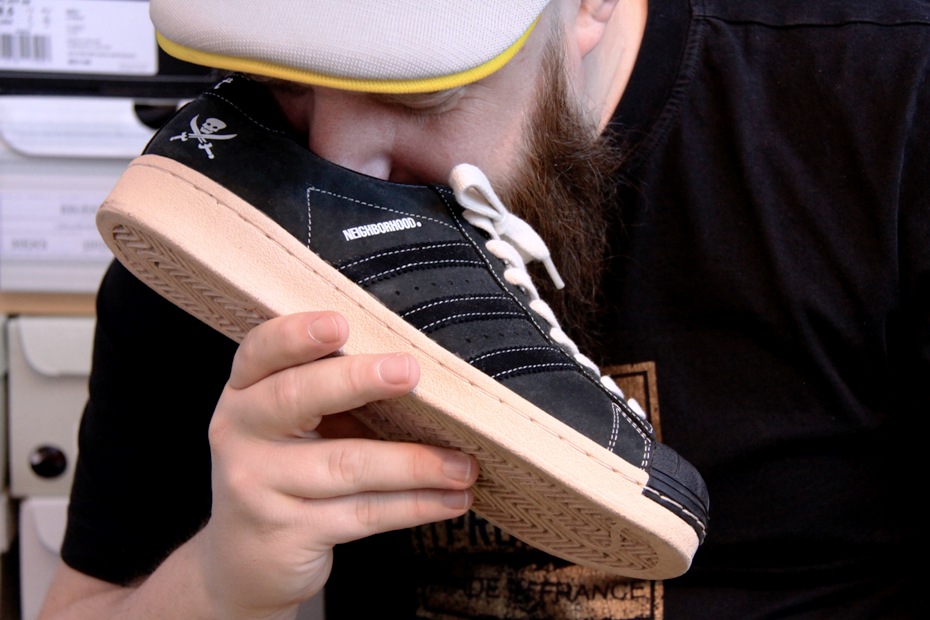 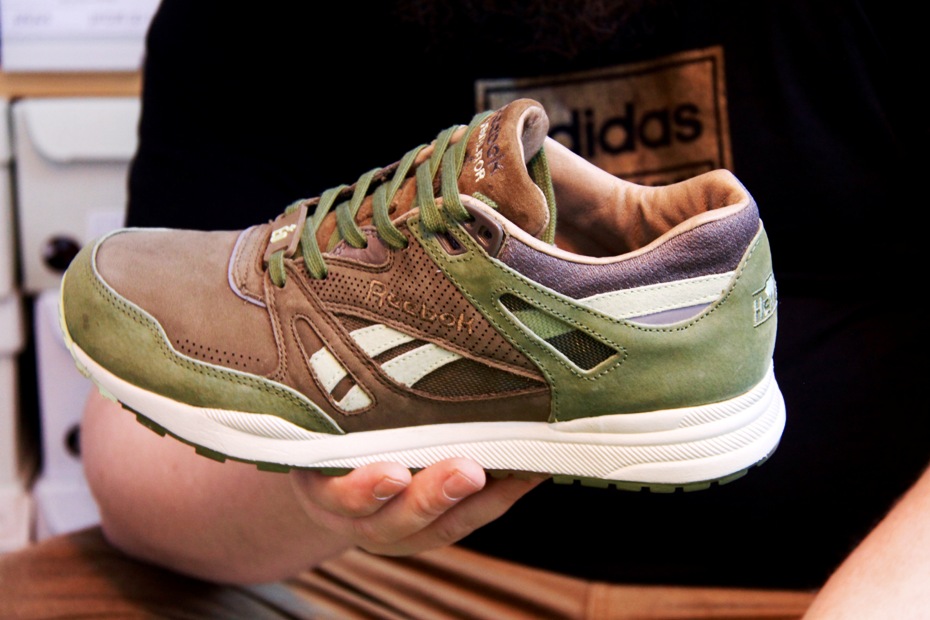 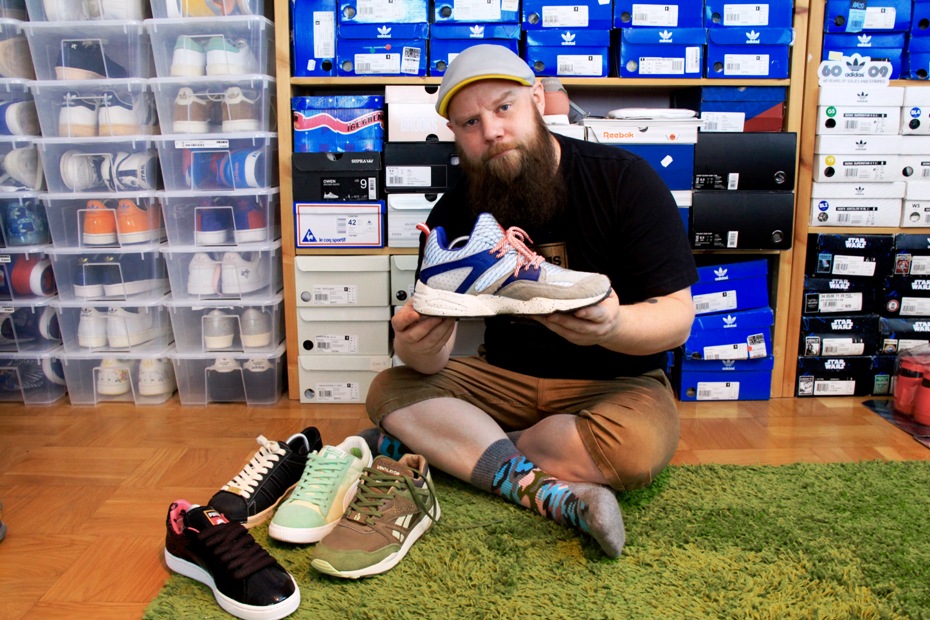 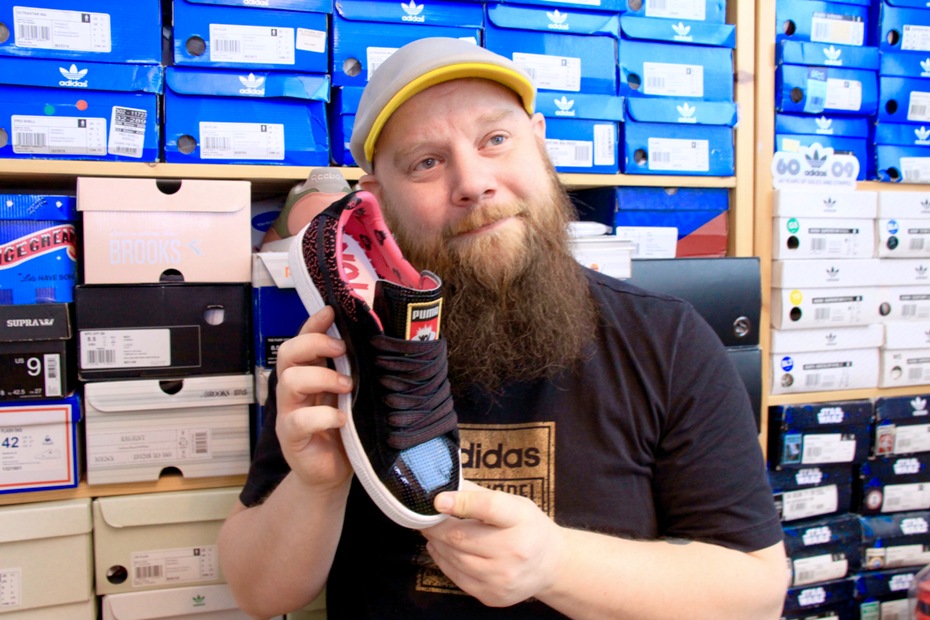 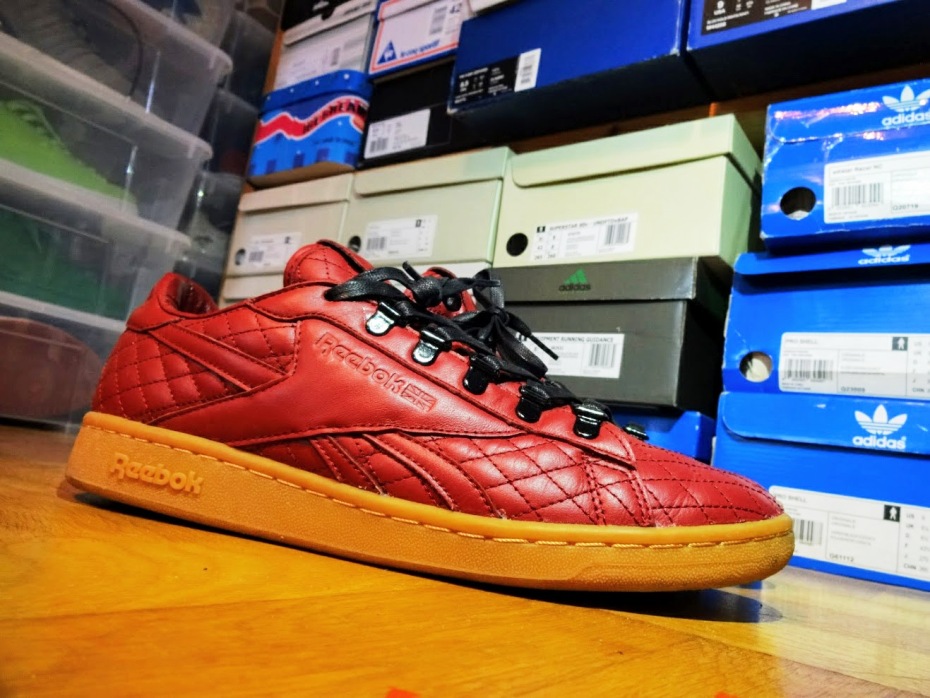 The orange Skywalkers… and the Alien stompers. These are my current major regrets. 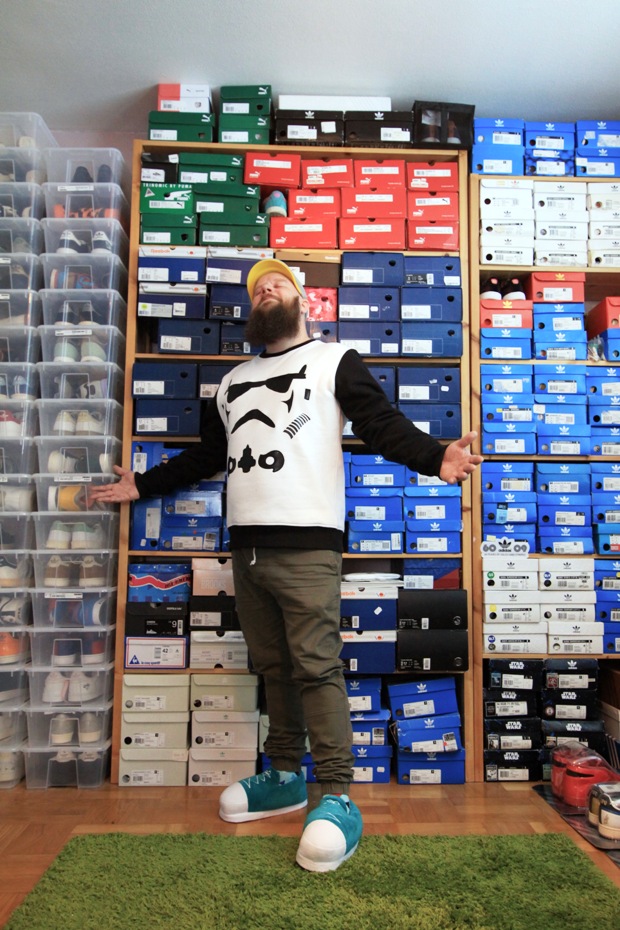 Grumpy G’s IG feed looks nothing short of a film reel itself. It’s colorful, it has a lot of variety, the different backdrops and locales and the star in the spotlight – all come together to weave a storyline. Being associated with Quality Assurance of Video Games for the last 10 years made me think I had one of the coolest jobs in the world but after interacting with Thomas, I realized how cool his job actually is! Of course it’s fun to wear video game inspired kicks but movies is just next level stuff. He also introduces us to a Facebook group where he gets to e-meet with like minded sneaker enthusiasts from Sweden which I’m finding more synonymous with European collectors, if you look at some of our past features.  I’d like to thank Grumpy G for taking the time to do this feature, for fighting the good fight against all injustices in his favorite kicks and for sharing his dope collection with us. Oh and I always RESPECT THE BEARD!