Kareem Abdul Jabbar might have been bare foot when he fought Bruce Lee in one of my favorite legendary classics Game of Death, but on court the famous Milwaukee Bucks and LA Lakers player is remembered as the #1 scorer in NBA history with 38,387 points (a record that remains unbroken till date!) all the while wearing his Adidas Superstars. In fact, he had the first ever signature basketball shoe back in 1980, even though the shoe itself dates back to 1969. Adidas had come up with an all-leather upper shoe when canvas shoes were the norm and they had given it a rubber toe cap that won Jabbar over. Clearly, the shoe was ahead of its time in terms of innovation, materials and appeal.

The Superstar is the low top version of the Pro Model basketball shoe and came into existence in 1969. The shoe had a unique padding called SoftProtect to protect the achilles tendon on the heel, featured a rubber shell toe-piece, an all-leather upper, and a herringbone-pattern rubber outsole for grip on-court. The shoe was simple, functional and it looked good. Adidas was already experimenting with tennis shoes and they came up with reinforced toes. It was this experimentation that spawned the shell toe on the Adidas Superstar. Over the years, the shoe has undergone a few changes and has even adorned the PrimeKnit skin developed by Adidas. 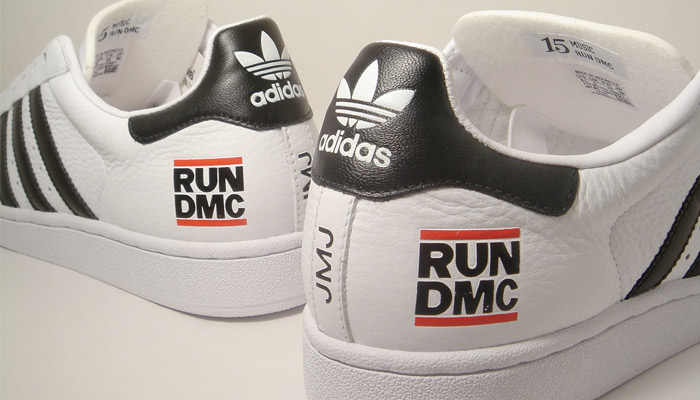 Just when the shoe seemed to be fizzling out in popularity heading into the 80’s, a rap group from Queens, New York named RUN DMC would release a song called “My Adidas” in 1986 confessing their love for the sneaker. Everywhere they’d go, they’d rock the Adidas Superstars on their feet with the fat laces undone and with the tongue pushed out all the way. That’s how they made public appearances and rocked concert stages.

Standin on 2 Fifth St.
funky fresh and yes cold on my feet
with no shoe string in em, I did not win em
I bought em off the Ave with the black Lee denim
I like to sport em that’s why I bought em
a sucker tried to steal em so I caught em and I fought em
and I walk down the street and I bop to the beat
with Lee on my legs and adidas on my feet
and now I just standin here shooting the gif
me and D and my Adidas standing on 2 Fifth
My Adidas..
My Adidas..

At their Madison Square Garden performance, RUN DMC asked every fan in the crowd to hold up their Adidas Superstars. This had a charismatic effect on the fans and made the sneaker larger than life. The fans followed their favorite rap group and started rocking their Adidas the same way which marked the birth of the sneaker culture in hip-hop and literally took over the streets. The shoe became a fashion icon as everyone outside of a basketball court wanted to rock it too.

Adidas paid a tribute to RUN DMC’s Jam Master Jay who passed away in 2002, the proceeds from which went to Jam Master Jay foundation. The three stripe brand has also done several collabs including Mark Gonzales, Pharrell Williams and Jay Z.