Red is the color of action, assertiveness and confidence, excitement, power, passion and courage. It also represents spontaneity and determination while being flamboyant and attention-seeking. It’s stimulating and energizing. On the other hand, it’s domineering and aggressive, obstinate and intolerant, rebellious and quick-tempered.

When a designer sits down to create something in red, he/she can decide to tone down the negatives of what it represents. The end result is a bunch of variations like Burgundy, Crimson, Maroon and Scarlet. The message the designer and the color intends to convey can often be far different from what we perceive it to be. Often times, it’s just – “that’s a dope shoe!”

We’re here to pay homage to some of the best designed red sneakers, 10 of them. There are more but we feel these sum up a lot of philosophies. Let’s dive right in and check out why these are on our must-have list. 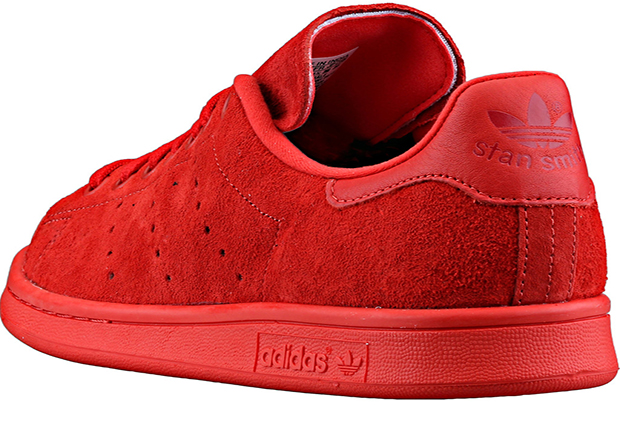 The Stan Smith is a classic shoe and has been worn by different generations that love simplicity in their style. The shoe’s low-profile and clunk-free simplicity makes it a blank canvas for designers to go crazy which is a big reason why we’ve seen so many collabs lately. A tennis all-star shoe that debuted in 1971, the shoe till date is an OG among sneakers. This mix of nubuck and tumbled leather along with a matching rubber out-sole in bold red is a head turner and an announcement of your arrival. 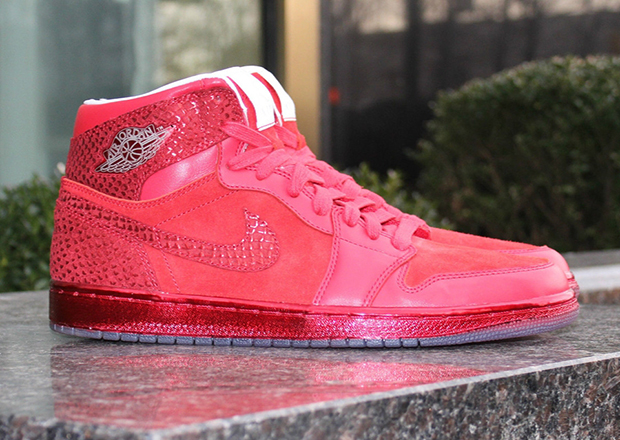 Justin Timberlake and Jay Z were on the Legends of Summer Tour with a twist. Timberlake debuted a number of all-red Air Jordans (1, 2 and 3) during his “Legends of the Summer” concert series by leaving a pair behind during a stop in each city to be found by some lucky fan. These suede-and-leather sculpted uppers with safari print and reptile-skin-embossing scream quality and make your wallet bleed for the right reason. Definitely a collector’s pack with Jordan 1, 2 and 3 in their respective red hides, these are some of the best made red sneakers in terms of materials.

At first glance, this shoe comes off as one of the most uncanny designs ever seen. But if you look hard enough, that’s exactly what makes it so special. Fourth edition collaboration by Patrick Mohr and dcac, the shoe features multi-function suede straps, snap-back button, leather laces, a signature wooden triangle, and a rubber sole. The silhouette gives your feet a very slim look and looks amazingly stylish. 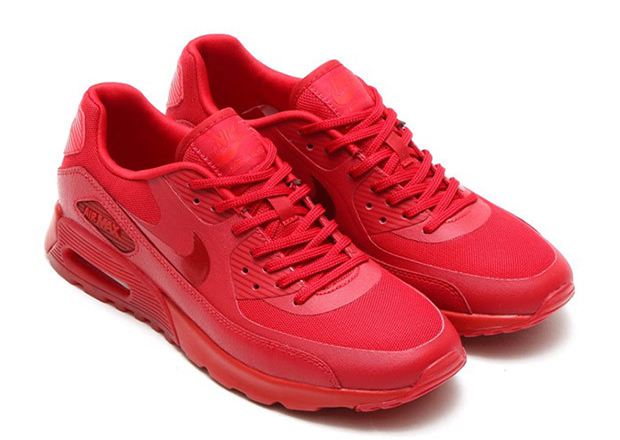 Slated for release around the American Independence day, this red Air Max 90 was one of the three joints dipped in American Patriotism – White, Blue, Red. Not only does an Air Max 90 mean a lot to sneakerheads, a red one at that means even more for reasons mentioned at the beginning of this article. The Air Max 90 needs no introduction but for the uninitiated, the silhouette is a stab different to Tinker Hatfield’s classic Nike Air Max 90 runner. Instead of traditional leather, the upper features a Hyperfuse paneling with the toebox covered in mesh for breathability. The upper looks seamless due to the same reason and gives the silhouette a very clean look. Nobody cares if you’re an American or not because if you have this shoe, you have a part of Tinker’s legacy and American Patriotism.

The suede classic is a household name and has the portfolio of a supermodel. The silhouette belongs to the incubator of the city scene back in 1968 when people were first introduced to something other than ordinary leather. A warm-up shoe that was made famous by the basketball great Walt “Clyde” Frazier and the track trailblazer Tommie Smith, the silhouette found mad love on the streets of New York during the ’80s dawn of b-boys and hip-hop beats. The silhouette continues to enjoy legend status even today ever since Puma gave this classic silhouette a one-color upper and an iced out-sole to keep the streets lit. The shoe features a Suede upper, lace closure, iced rubber out-sole, signature PUMA Formstrip at lateral and medial sides, PUMA Suede call-out at lateral side, woven PUMA logo label on the tongue and PUMA Cat logo at heel. Long story short, just close your eyes and pick this high risk red + team gold red devil and thank us later. 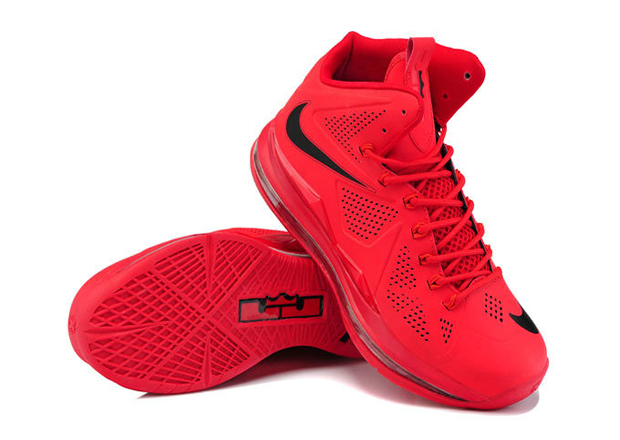 If the Nike Lebron X is known for anything more than what a ridiculously irresistible shoe it is, it’s the number of colors it’s available in. The Lux look on a basketball sneaker has always been an eye catcher for everyone but the fact that King James has actually hooped in a couple of suede shoes makes this one even more desirable! The shoe has a sharp design, a lot of detail and character, it’s bold and beautiful. The laser etched LBJ Lion logos and the perforation on the upper are just perfect. The embroidered Nike swoosh in black on the heel looks dope atop the all-suede upper as if completing a masterpiece. 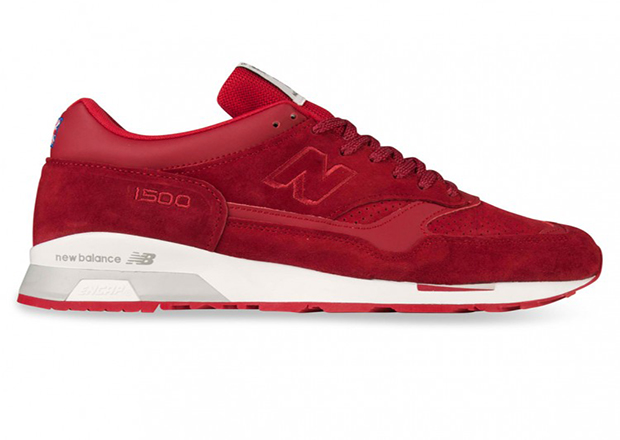 This member of the Made in UK “Tonal Pack” that featured a Navy CT300 and NB 577 in Grey, proudly adorns the Union Jack on its tongue and heel. The red suede upper, perforated toebox, branding on the white and grey mid-sole, a matching red rubber outsole and its overall look and feel puts it ahead of the St. Alfred’s collab that features a mesh toebox and a gum outsole. The 1500 silhouette has been a collab magnet and New Balance’s reputation for making some of the most comfortable shoes in the world accentuates the desirability of this particular model tenfold. 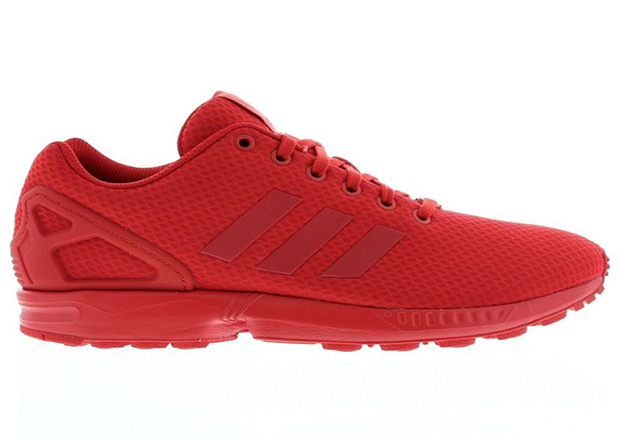 A descendant of the ZX 8000, the shoe features a one-piece mesh upper which is quite comfortable and has welded TPU 3-stripes on the side. The TPU heel counter echoes the design aesthetics of the old ZX 1000 series, albeit with new skin and technology. The shoe enjoyed quite a healthy rivalry as it got pitted against the sensation of 2012 –  Nike Roshe Run, sparking several query threads across the world on which one to get and why? The 3-striped revamped classic hit the high-point of its desirability in 2014 and everyone wanted to have a pair. Adidas obliged with the mi zxflux app giving the buyers the option to fully customize the shoe with their own designs making the shoe go viral. 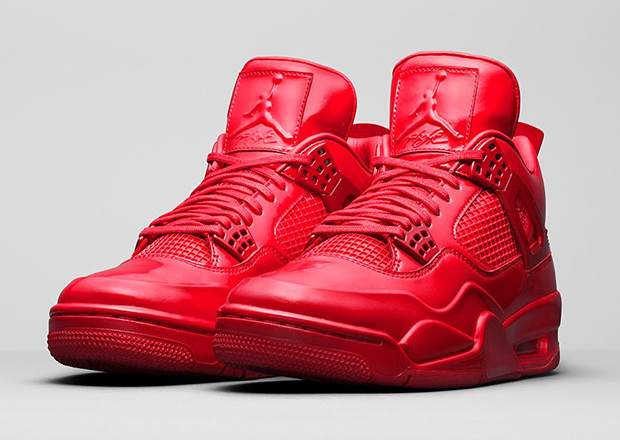 As if Air Jordan 4 wasn’t hyped enough in basic colors and materials, this Air Jordan LAB series uses the patent leather elements from the Air Jordan 11 and  smacks it on top of an Air Jordan 4 to get the 11LAB4. The shoe features a full University Red patent leather upper that sits atop a full all-red midsole and outsole. The Jordan 4 is popular because of the man who hooped in them, but even more popular because of how many limited editions this silhouette has seen from different designers and brands. 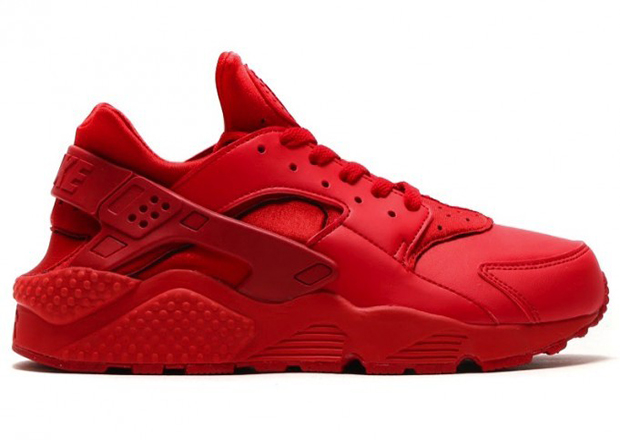 The brainchild of Tinker Hatfield’s ingenuity, the Air Huarache Varsity Red boasts of premium leather overlays and a matching toe box, as opposed to the usual mesh. The sneaker was available in “Varsity Red” and “Midnight Navy” at the time of release. The neoprene bootie construction and leather paneling sat aptly atop an air-cushioned midsole and TPU heel support wrap. Even though the shoe has been around since ’91, recent color-blocked variants have done a great job of bringing it back to the forefront.

What are some of your favorite red sneakers? Did you like our 10 picks? What do you think? Let us know in the comments section below or connect with us on IG and Twitter: @_thatshoeguy_