The California based brand has been around for a long time and despite having a wide range of silhouettes, has been rather particular about who it collaborates with and why. This approach has kept a sort of mysticism around the brand and has helped build more anticipation for every upcoming iteration of Sk8 Hi goodness. In this piece, we give you our top 10 Vans Sk8 Hi Collaborations which also include some of the more recent collabs.

Bad Brains were the pioneers of punk and fusion with major influences from jazz, metal, and reggae. When they collaborated with Supreme for a capsule collection, the colors and execution embodied their music. The pack consisted of three Sk8-Hi’s, all in vibrant colors with the left heel of the pair reading “Tough” and the right heel reading “Times” in emboridery. This was not just a collaboration but more of an ode by Supreme and Vans to the classic four-man band and their Rastafarian image.

An artist at heart, a skateboarder and a creator of badass Choppers Jason Jesse joined forces with Vans to create a Sk8-Hi. The result was this badass pair in two colorways constructed from well oiled premium leather and equipped with brass lace-hooks at the top along with a pre-scuffed vulcanized sole for the shredders. The black pair rocked contrast stitching while the Brown had tonal written all over it. As much as the art side came into play, you can clearly tell the shoe took some inspiration from the signature badass demeanor of a biker rocking his cut and denim.

Pendleton’s vivid colors and intricate patterns deserve a great canvas and Sk8-Hi is the perfect silhouette for them to show off their creativity. Scotchgard®-treated custom Pendleton wool uppers, warm fleece linings, a heat retention layer between sockliner and outsole to keep feet warm and dry, reinforced toecaps, padded collars, and the vulcanized lug outsole make it the perfect shoe for the winter season. It’s something Converse tried to achieve with their Woolrich collab but Vans x Pendleton is the one that went down in history books as the perfect marriage of form and function. 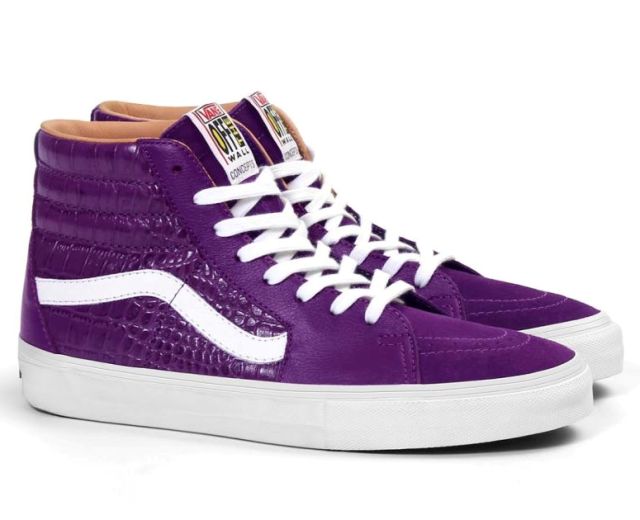 This purple Sk8-Hi comes from the house of Cncpts and also made it to our Six of the best purple sneakers ever made. The gator pattern along the side of the shoe all the way up to the ankle area of the shoe gives it a nice glossy look while the rest of the upper looks amazing in a matte finish. The combination of white, purple and brown leather lining is unique to this shoe and makes all three pop in a unique way. The tongue features a zipper that goes all the way up to the branding but can be left open midway to make the branding stand out.

This was the American designer’s first stint with Vans and vice-versa! Just like any designer, his obvious choice was a deviation from the standard canvas but usage of something more interesting instead. Even though the entire shoe’s clad in patent leather, he nailed the color combinations on the pairs. The glossy gradient look of the patent leather on the navy pair’s upper matched with tonal stitching and a crazy inner lining rattles a few cages to this day.

Rocking the cotton canvas and suede upper with an 8-ball print all over the side panels, a leather side stripe, padded ankle support, classic waffle sole and checkered laces, this Sk8-Hi is just one of the master strokes from Shawn Stussy. The design influences hail back to the golden era of streetwear. This design was doodled by Shawn back in 1991 and the collab features prints that were hot in the 80’s and 90’s but have vanished on footwear since.

Bodega has paid homage to the instant scratch-off lottery tickets with this collab. The Bodega Vans Sk8-Hi LX features a premium suede and canvas build with pastel shades of blue, green, and pink throughout. A classic gum sole sits under the dice details that are stitched into the heel surrounded by a wildflower for good luck. Each pair even comes packaged with its own scratch-off ticket.

This is an OG pair in every sense of the word. Hip-hop legend Ice-T used to be part of a metal band called Body Count. Later down the line, Vans decided to commemorate that period in his life with this shoe. Canvas upper wrapped around in black suede, his name on the sides of the shoe, the tongues reading “Rhyme” and “Syndicate” (which is a jab at the usual term – Crime Syndicate) while both the heels read “OG” had to be an Ice-T shoe! The pair included a mini body bag alongside a gold-plated revolver keychain, in sync with the underlying theme of the shoe.

Oregon’s Pendleton Woolen Mills had teamed up with Vans before and their warm signature patterns were equally well matched for this one.  The Taka Hayashi x Vans Pendleton Pack blended the Japanese artist’s Native American-inspired designs with vivid Pendleton wool patterns to create one of the nicest Sk8-His. The golden brown leather combined with the white stitching along with the patterns on the mid-sole and the Pendleton patterns on the side panels landed this triple collab on the #2 spot in my top 10.

Taka Hayashi is a name synonymous with Vans. The Japanese designer has done several collabs with the brand and seems to be their go-to guy whenever they want to spruce up their offerings for the season. It’s no surprise his renditions of the Sk8-Hi have done particularly well compared to other brands and his design approach has won many hearts. This Engineer LX Sk8-Hi model was available in two colorways – Black and Tortoise Shell. The pair features a lush leather upper with criss-cross straps harnessed together by a metal ring.

Do you like my Top 10 Vans Sk8-Hi collabs? What do you think are some of the dopest Vans collabs out there? Let me know in the comments section below or hit me up on Instagram!